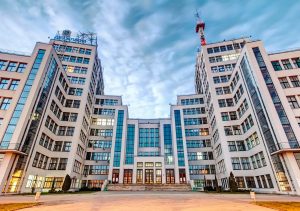 Kharkiv  is the second-largest city of Ukraine. Located in the north-east of the country, it is the largest city of the Slobozhanshchyna historical region.The city was founded in 1654 and was a major centre of Ukrainian culture in the Russian Empire. Kharkiv was the first city in Ukraine to acknowledge Soviet power in December 1917 .Kharkiv became the first capital of the

Ukrainian Soviet Socialist Republic until January 1935, after which the capital was relocated to Kiev. Kharkiv is the administrative centre of Kharkiv Oblast and the surrounding Kharkiv district.Kharkiv is a major cultural, scientific, educational, transport and industrial centre of Ukraine, with 60 scientific institutes, 30 establishments of higher education, 6 museums, 7 theatres and 80 libraries. Its industry specialises primarily in machinery and electronics. There are hundreds of industrial companies in the city. Among them are globally important giants like the Morozov Design Bureau and the Malyshev Tank Factory (leaders in world tank production in the 1930s through 1980s); Khartron (aerospace and nuclear electronics); and the Turboatom turbines producer.

CultureClimateEconomyTourismTransportation
Kharkiv is one of the main cultural centres in Ukraine. It is home of 20 museums, over 10 theaters and a number of picture galleries. Large music and cinema festivals are hosted in Kharkiv almost every year.
Kharkiv’s climate is humid continental , with cold and snowy winters, and hot summers. The seasonal average temperatures are not too cold in winter, not too hot in summer: −4.6 °C (23.7 °F) in January, and +21.3 °C (70.3 °F) in July. The average rainfall totals 513 mm (20 in) per year, with the most in June and July.

During the Soviet era Kharkiv was the capital of industrial production in Ukraine and the third largest centre of industry and commerce in the USSR. After the collapse of the Soviet Union the largely defence-systems-oriented industrial production of the city decreased significantly. In the early 2000s the industry started to recover and adapt to market economy needs. Now there are more than 380 industrial enterprises concentrated in the city, which have a total number of 150,000 employees. The enterprises form machine-building, electro-technologic, instrument-making, and energy conglomerates.

State-owned industrial giants, such as Turboatom and Elektrotyazhmash occupy 17% of the heavy power equipment construction (e.g., turbines) market worldwide. Multipurpose aircraft are produced by the Antonov aircraft manufacturing plant. The Malyshev factory produces not only armoured fighting vehicles, but also harvesters. Khartron[60] is the leading designer of space and commercial control systems in Ukraine and the former CIS.

Kharkiv is also the headquarters of one of the largest Ukrainian banks, UkrSibbank, which has been part of the BNP Paribas group since December 2005.

The city of Kharkiv is one of the largest transportation centres in Ukraine, which is connected to numerous cities of the world by air, rail and road traffic. The city has many transportation methods, including: public transport, taxis, railways, and air traffic. There are about 250 thousand cars in the city.[92]

Local transport
Being an important transportation centre of Ukraine, Kharkiv itself contains many different transportation methods. Kharkiv’s Metro is the city’s rapid transit system, operating since 1975, it includes three different lines with 29 stations in total.[93] The Kharkiv buses carry about 12 million passengers annually, trolleybuses, tramways (which celebrated 100 years of service in 2006), and marshrutkas (private minibuses).

Railways
Kharkiv Railway Station Main Entrance, August 2011
The first railway connection of Kharkiv was opened in 1869. The first train to arrive in Kharkiv came from the north on 22 May 1869, and on 6 June 1869, traffic was opened on the Kursk–Kharkiv–Azov line. Kharkiv’s passenger railway station was reconstructed and expanded in 1901, to be later destroyed in the Second World War. A new railway station was built in 1952.
Kharkiv is connected with all main cities in Ukraine and abroad by regular railway trains. Regional trains known as elektrichkas connect Kharkiv with nearby towns and villages.

Air travel
Kharkiv is served by an international airport which used to have about 200 flights a day, almost all of them being passenger flights. The Kharkiv International Airport has been granted international status. The airport is not large and is situated within the city boundaries, south from the city centre. Flights to Kiev and Moscow are scheduled daily. There are regular flights to Vienna and Istanbul, and several other destinations. Charter flights are also available. The former largest carrier of the Kharkiv Airport — Aeromost-Kharkiv — is not serving any regular destinations as of 2007. The Kharkiv North Airport is a factory airfield and was a major production facility for Antonov aircraft company.