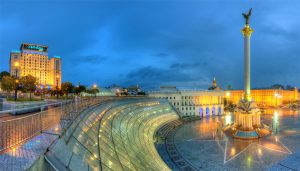 Kiev or Kyiv  is the capital and the largest city of Ukraine, located in the north central part of the country on the Dnieper River. The population in July 2013 was 2,847,200[1] (though higher estimated numbers have been cited in the press), making Kiev the 8th largest city in Europe.

Kiev is an important industrial, scientific, educational, and cultural centre of Eastern Europe. It is home to many high-tech industries, higher education institutions and world-famous historical landmarks. The city has an extensive infrastructure and highly developed system of public transport, including the Kiev Metro.

The city’s name is said to be derived from the name of Kyiv, one of its four legendary founders . During its history, Kiev, one of the oldest cities in Eastern Europe, passed through several stages of great prominence and relative obscurity. The city probably existed as a commercial centre as early as the 5th century

There are many libraries in the city with the Vernadsky National Library, which is Ukraine’s main academic library and scientific information centre, as well as one of the world’s largest national libraries, being the largest and most important one.[95] The National Library is affiliated with the Academy of Sciences in so far as it is a deposit library and thus serves as the academy’s archives’ store. Interestingly the national library is the world’s foremost repository of Jewish folk music recorded on Edison wax cylinders. Their Collection of Jewish Musical Folklore (1912–1947) was inscribed on UNESCO’s Memory of the World Register in 2005.iev hosts many universities, the major ones being Kiev National Taras Shevchenko University the National Technical University ”

Kiev Polytechnic Institute”,[98] and the Kyiv-Mohyla Academy. Of these, the Mohyla Academy is the oldest outright, having been founded as a theological school in 1632, however the Shevchenko University, which was founded in 1834, is the oldest in continuous operation. The total number of institutions of higher education in Kiev currently approaches 200,[100] allowing young people to pursue almost any line of study. While education traditionally remains largely in the hands of the state there are several accredited private institutions in the city.
There are about 530 general secondary schools and ca. 680 nursery schools and kindergartens in Kiev.[101] Additionally, there are evening schools for adults, and specialist technical schools.

Modern Kiev is a mix of the old (Kiev preserved about 70 percent of more than 1,000 buildings built during 1907–1914) and the new, seen in everything from the architecture to the stores and to the people themselves. When the capital of the Ukrainian SSR was moved from Kharkiv to Kiev many new buildings were commissioned to give the city “the gloss and polish of a capital”. In the discussions centered on how to create a showcase city center the current city center of Khreshchatyk and Maidan Nezalezhnosti (Independence Square) were not the obvious choices. Some of the early, ultimately not materialised, ideas included a part of Pechersk, Lypky, European Square and Mykhailivska Square.[65] The plans of building massive monuments (of Vladimir Lenin and Joseph Stalin) were also abandoned; due to lack of money (in the 1930s–1950s) and because of Kiev’s hilly landscape. [65] Experiencing rapid population growth between the 1970s and the mid-1990s, the city has continued its consistent growth after the turn of the millennium. As a result, Kiev’s central districts provide a dotted contrast of new, modern buildings among the pale yellows, blues and greys of older apartments. Urban sprawl has gradually reduced, while population densities of suburbs has increased. The most expensive properties are located in the Pechersk, and Khreshchatyk areas. It is also prestigious to own a property in newly constructed buildings in the Kharkivskyi Raion or Obolon along the Dnieper.

A public concert held on Maidan Nezalezhnosti during Kiev’s 2005 Eurovision Song Contest
Ukrainian independence at the turn of the millennium has heralded other changes. Western-style residential complexes, modern nightclubs, classy restaurants and prestigious hotels opened in the centre. And most importantly, with the easing of the visa rules in 2005,[66] Ukraine is positioning itself as a prime tourist attraction, with Kiev, among the other large cities, looking to profit from new opportunities. The centre of Kiev has been cleaned up and buildings have been restored and redecorated, especially Khreshchatyk and Maidan Nezalezhnosti. Many historic areas of Kiev, such as Andriyivskyy Descent, have become popular street vendor locations, where one can find traditional Ukrainian art, religious items, books, game sets (most commonly chess) as well as jewellery for sale.

At the United Nations Climate Change Conference 2009 Kiev was the only Commonwealth of Independent States city to have been inscribed into the TOP30 European Green City Index (placed 30th).[68]

Kiev’s most famous historical architecture complexes are the St. Sophia Cathedral and the Kiev Pechersk Lavra (Monastery of the Caves), which are recognized by UNESCO as a World Heritage Site. Noteworthy historical architectural landmarks also include the Mariyinsky Palace (designed and constructed from 1745 to 1752, then reconstructed in 1870), several Orthodox churches such as St. Michael’s Cathedral, St. Andrew’s, St. Vladimir’s, the reconstructed Golden Gate and others.

One of Kiev’s widely recognized modern landmarks is the highly visible giant Mother Motherland statue made of titanium standing at the Museum of the Great Patriotic War on the Right bank of the Dnieper River. Other notable sites is the cylindrical Salut hotel, located across from Glory Square and the eternal flame at the World War Two memorial Tomb of the Unknown Soldier, and the House with Chimaeras.

Among Kiev’s best-known monuments are Mikhail Mikeshin’s statue of Bohdan Khmelnytsky astride his horse located near St. Sophia Cathedral, the venerated Vladimir the Great (St. Vladimir), the baptizer of Rus’, overlooking the river above Podil, the monument to Kyi, Schek and Khoryv and Lybid, the legendary founders of the city located at the Dnieper embankment. On Independence Square in the city centre, two monuments elevate two of the city protectors; the historic protector of Kiev Michael Archangel atop a reconstruction of one of the old city’s gates and a modern invention, the goddess-protector Berehynia atop a tall column.

As with most capital cities, Kiev is a major administrative, cultural and scientific centre of the country. It is the largest city in Ukraine in terms of both population and area and enjoys the highest levels of business activity. On 1 January 2010 there were around 238,000 business entities registered in Kiev.[78]

Official figures show that between 2004 and 2008 Kiev’s economy outstripped the rest of the country’s, growing by an annual average of 11.5%.[79][80] Following the global financial crisis that began in 2007, Kiev’s economy suffered a severe setback in 2009 with gross regional product contracting by 13.5% in real terms.[79] Although a record high, the decline in activity was 1.6 percentage points smaller than that for the country as a whole.[80] The economy in Kiev, as in the rest of Ukraine, recovered somewhat in 2010 and 2011. Kiev is a middle-income city, with prices currently comparable to many mid-size American cities (i.e., considerably lower than Western Europe); and despite the poverty of the rest of the country, and large tracts of Soviet apartment blocks, has a notable lack of slums.

Because the city boasts a large and diverse economic base and is not dependent on any single industry and/or company, its unemployment rate has historically been relatively low – only 3.75% over 2005–2008.[81] Indeed, even as the rate of joblessness jumped to 7.1% in 2009, it remained far below the national average of 9.6%.

Kiev is the undisputed center of business and commerce of Ukraine and home to the country’s largest companies, such as Naftogaz Ukrainy, Energorynok and Kyivstar. In 2010 the city accounted for 18% of national retail sales and 24% of all construction activity.[83][84][85][86] Indeed, real estate is one of the major forces in Kiev’s economy. Average prices of apartments are the highest in the country and among the highest in eastern Europe.[87] Kiev also ranks high in terms of commercial real estate for it is here where the country’s tallest office buildings (such as Gulliver and Parus) and some of Ukraine’s biggest shopping malls (such as Dream Town and Ocean Plaza) are located.

Kiev is home to many of Ukraine’s largest businesses.
In May 2011 Kiev authorities presented a 15-year development strategy which calls for attracting as much as EUR82 billion of foreign investment by 2025 to modernize the city’s transport and utilities infrastructure and make it more attractive for tourists.

Local public transportation in Kiev includes the Metro (underground), buses and minibuses, trolleybuses, trams, taxi and funicular. There is also an intra-city ring railway service.
Trolleybus ElektroLAZ-301 at Sofia Square.
The publicly owned and operated Kiev Metro is the fastest, the most convenient and affordable network that covers most, but not all, of the city. The Metro is continuously expanding towards the city limits to meet growing demand, currently having three lines with a total length of 66.1 kilometres (41.1 miles) and 51 stations (some of which are renowned architectural landmarks). The Metro carries around 1.422 million passengers daily[102] accounting for 38% of the Kiev’s public transport load. In 2011, the total number of trips exceeded 519 million.
The historic tram system, once a well maintained and widely used method of transport, is now gradually being phased out in favor of buses and trolleybuses.

All public road transport (except for some minibuses) is operated by the united Kyivpastrans municipal company. It is heavily subsidized by the city.

The Kiev public transport system, except for taxi, uses a simple flat rate tariff system regardless of distance traveled: tickets or tokens must be purchased each time a vehicle is boarded. Digital ticket system is already established in Kiev Metro, with plans for other transport modes. Discount passes are available for grade school and higher education students. Pensioners use public transportation free. There are monthly passes in all combinations of public transportation. Ticket prices are regulated by the city government, and the cost of one ride is far lower than in Western Europe.

The taxi market in Kiev is expansive but not regulated. In particular, the taxi fare per kilometer is not regulated. There is a fierce competition between private taxi companies.

Traffic jams and lack of parking space are growing problems for all road transport services in Kiev.

Air transport
Kiev is served by two international passenger airports: the Boryspil Airport located 30 kilometres (19 miles) away, and the smaller, municipally owned Zhulyany Airport on the southern outskirts of the city. There are also the Gostomel cargo airport and additional three operating airfields facilitating the Antonov aircraft manufacturing company and general aviation.

Railways
Railways are Kiev’s main mode of intracity and suburban transportation. The city has a developed railroad infrastructure including a long-distance passenger station, 6 cargo stations, depots, and repairing facilities. However, this system still fails to meet the demand for passenger service. Particularly, the Kiev Passenger Railway Station is the city’s only long-distance passenger terminal (vokzal).

Construction is underway for turning the large Darnytsia Railway Station on the left-bank part of Kiev into a long-distance passenger hub, which may ease traffic at the central station.[107] Bridges over the Dnieper River are another problem restricting the development of city’s railway system. Presently, only one rail bridge out of two is available for intense train traffic. A new combined rail-auto bridge is under construction, as a part of Darnytsia project.

Kiev Railway Station
In 2011 the Kiev city administration established a new ‘Urban Train’ for Kiev. This service runs at standard 4-10-minute intervals throughout the day and follows a circular route around the city centre, which allows it to serve many of Kiev’s inner suburbs. Interchanges between the Kiev Metro and Fast Tram exist at many of the urban train’s station stops.

Suburban ‘Elektrichka’ trains are serviced by the publicly owned Ukrainian Railways. The suburban train service is fast, and unbeatably safe in terms of traffic accidents. But the trains are not reliable, as they may fall significantly behind schedule, may not be safe in terms of crime, and the elektrichka cars are poorly maintained and are overcrowded in rush hours.

There are 5 elektrichka directions from Kiev:

Nizhyn (north-eastern)
Hrebinka (south-eastern)
Myronivka (southern)
Fastiv (south-western)
Korosten (western)
More than a dozen of elektrichka stops are located within the city allowing residents of different neighborhoods to use the suburban trains.