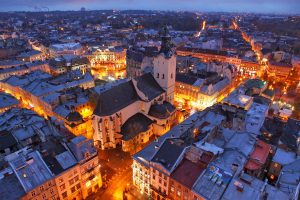 Formerly capital of the historical region of Galicia, Lviv is now regarded as one of the main cultural centres of today’s Ukraine. The historical heart of Lviv with its old buildings and cobblestone streets has survived Soviet and Nazi occupation during World War II largely unscathed.

The city has many industries and institutions of higher education such as Lviv University and Lviv Polytechnic. Lviv is also a home to many world-class cultural institutions, including a philharmonic orchestra and the famous Lviv Theatre of Opera and Ballet. The historic city centre is on the UNESCO World Heritage List.

Lviv celebrated its 750th anniversary with a son et lumière in the city centre in September 2006. On 12 June 2009 the Ukrainian magazine Focus judged Lviv the best Ukrainian city to live in. Its more Western European flavor has earned it the nickname the “Little Paris of Ukraine”.

The city of Lviv was the location where the software for the Lunokhod programme was developed. The technology for the Venera series probes and the first orbital shuttle Buran were also developed in Lviv. A considerable scientific potential is concentrated in the city: by the number of candidates of sciences, scientific organizations Lviv is the fourth city in Ukraine. Over 100,000 students annually study in more than 50 higher educational establishments.

CultureClimateEconomyTourismTransportation
Lviv is one of the most important cultural centers of Ukraine. The city is known as a center of art, literature, music and theatre. Nowadays, the indisputable evidences of the city cultural richness is a big number of theaters, concert halls, creative unions, and also high number of many artistic activities (more than 100 festivals annually, 60 museums, 10 theaters).
Lviv’s historic centre has been on the United Nations Educational, Scientific and Cultural Organization (UNESCO) World Heritage list since 1998.
Lviv’s historic churches, buildings and relics date from the 13th century. In recent centuries it was spared some of the invasions and wars that destroyed other Ukrainian cities. Its architecture reflects various European styles and periods.
Lviv is located on the edge of the Roztochia Upland, approximately 70 km (43 mi) from the Polish border and 160 kilometres (99 miles) from the eastern Carpathian Mountains. The average altitude of Lviv is 296 metres (971.13 feet) above sea level. Its highest point is the Vysokyi Zamok (High Castle), 409 m (1,341.86 ft) above sea level. This castle has a commanding view of the historic city centre with its distinctive green-domed churches and intricate architecture.
Lviv’s climate is humid continental (Köppen climate classification Dfb) with cold winters and mild summers. The average temperatures are −3.1 °C (26 °F) in January and 18.3 °C (65 °F) in July. The average annual rainfall is 745 mm (29 in) with the maximum being in summer. Lviv approximately receives 1809 hours of sunshine annually.
Lviv is one of the largest cities in Ukraine and is growing rapidly. According to the Ministry of Economy of Ukraine the monthly average salary in the Lviv is a little less than the average for Ukraine which in February 2013 was 2765 UAH.
According to the World Bank classification Lviv is a middle-income city.
Lviv has 219 large industrial enterprises and almost 9,000 small ventures.
For many years machinery-building and electronics were leading industries in the Lviv. The Lviv-based company Elektron, trademark of national TV-set, produces also 32 and 37 inches liquid-crystal TV-sets. In 2013 Elektrotrans JV starts producing low-floor trams, the first Ukrainian 100% low-floor tramways.
Due to the rich cultural programme, developed infrastructure (now Lviv has more than 8 000 hotel rooms, over 700 cafes and restaurants, free WI-Fi zones in the city centre, good connection with many countries of the world) Lviv is considered one of Ukraine’s major tourist destinations. The city had a 40% increase in tourists in the early 2010s; the highest rate in Europe.
Touristic Areasi in Lviv:
The public bus network is represented by mini-buses (so-called marshrutka) and large buses mainly LAZ and MAN. On 1 January 2013 the city had 52 public bus routes. The price in August 2011 of a one-way single ride in a marshrutka within the city of Lviv was 2.00 UAH regardless of the distance traveled. No tickets are provided – and the money is paid to the driver.
The Lviv tramway now runs about 220 cars on 75 kilometres (47 miles) of track. Previously in bad shape many tracks were reconstructed in 2006 and even more are due to be reconstructed.
The price in February 2011 of a tram/trolleybus ticket was 1.50 UAH (reduced fare ticket was 0.60 UAH, e.g. for students). The ticket may be purchased from the driver.
Modern Lviv remains a hub on which nine railways converge providing local and international services. Lviv railway is one of the oldest in Ukraine. The first train arrived in Lviv on 4 November 1861. The main Lviv Railway Station, designed by Władysław Sadłowski, was built in 1904 and was considered one of the best in Europe from both the architectural and the technical aspects.
The airport is located 6 kilometres (4 miles) from the city centre. In 2012, after renovation, Lviv Airport get new official name Lviv Danylo Halytskyi International Airport (LWO). A new terminal and other improvements worth under a $200 million has been done in preparation for the 2012 UEFA European Football Championship. Public transport from Airport to City Center: Bus No. 48 and 9
Copyright © 1997-2021 StudyinUkraine.SITE. All Right Reserved.